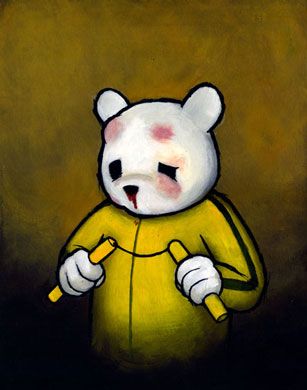 Standing 9" tall with 2 figures. "Possessed" is based on the original painting by acclaimed artist Luke Chueh, Employing minimal color schemes, simple animal characters, and a seemingly endless list of ill-fated situations, Luke stylistically balances cute with brute, . Luke Chueh was born on March 3, 1973, and he is a first generation Chinese-American, both of his parents having immigrated to the United States from China. When he was three months old, Chueh's family relocated from his birthplace of Philadelphia, Pennsylvania to Fresno, California.Alma mater: California Polytechnic State University.